What They Wore and What They Ate

It’s  fitting that this administration’s first State Visit should be with our oldest ally. Were it not for France and the help they gave to the colonists, we might be still be trying to perfect a curtsy before the Queen. Let’s leave politics to those outlets that ably cover it. For those who love fashion — and isn’t that one of the reasons we’re here? — it’s all about the clothes, and the past few days have been a visual fête.

On Monday, the French presidential party landed at Andrews Air Force Base. Brigitte Macron descended from the plane, looking the way most of us can only dream of after a transatlantic flight. She kept it simple (read: comfortable) in a white button-down blouse and skinny black pants that zip at the ankles. The pièce de résistance was a bubblegum pink double-breasted coat with black buttons. Black stiletto pumps and tote bag completed the look.

Next on the agenda was a tree planting on the South Lawn. To honor French-American friendship and to mark the centennial of the end of World War I, paying homage to American sacrifices in Europe during the Great War, they planted an oak sapling that was sprouted at Belleau Wood, site of an historic World War I battle.

For the tree planting, Brigitte wore a  buttercup yellow dress and matching coat with black buttons and ribbon belt, with black stiletto heels — Louis Vuitton is doing black accents this year. While Brigitte is faithful to Vuitton (the source of all of her outfits for this trip), Melania mixed it up, choosing a black Dolce & Gabanna dress topped with a tuxedo cape by Givenchy. Her accessories were a Ralph Lauren belt, Dior clutch, and Christian Louboutin’s So Kate shoes. As you can see, it worked. 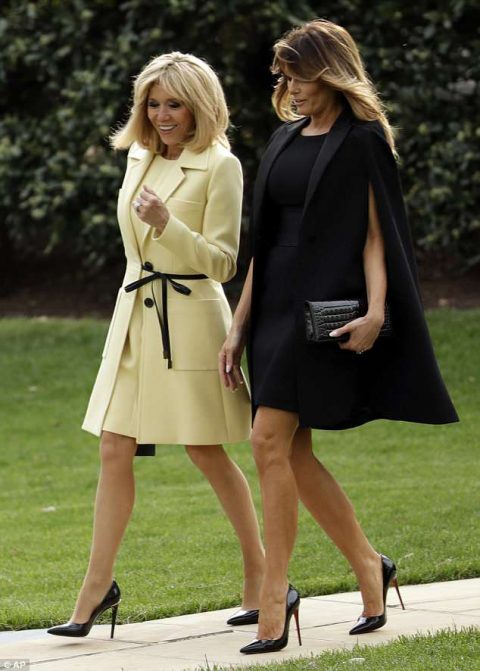 For the official arrival ceremony the next day, which included a 21-gun salute, cannons and patriotic music, both women chose white. Brigitte Macron wore a dress and matching jacket, both accented with black, while Melania Trump wore a belted suit with an asymmetrical hem by Michael Kors. 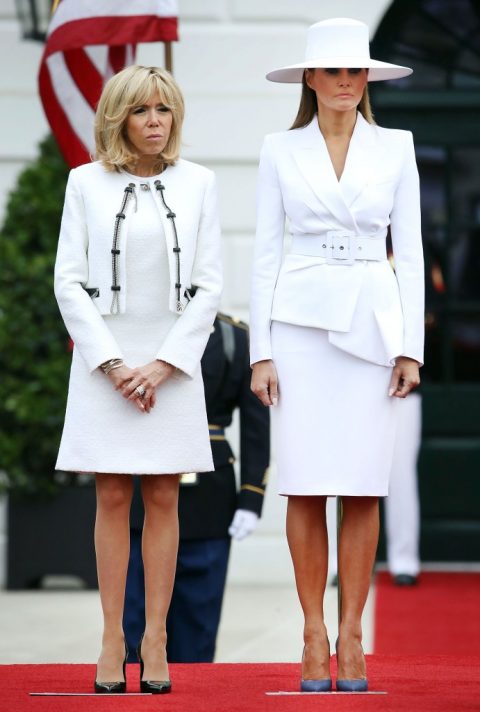 Melania’s hat, which has gotten more press than the presidential meetings, is by Hervé Pierre, a star in his own right. Monsieur Pierre has won the coveted Dior Prize, awarded by the Comité Colbert. His flair for the dramatic is evident; he has a background in art history and has designed costumes for several ballet companies. Before going out on his own, he worked for Oscar de la Renta and Bill Blass and as creative director at Vera Wang and Carolina Herrera. He collaborated with Mrs. Trump on her dress for the Inaugural Ball.

From the reviewing stand to the National Gallery of Art, Mesdames Macron and Trump went on a tour of the current exhibition, “Cezanne Portraits.” They seem to be enjoying themselves, don’t they? Beyond some common interests and a shared affinity for style, it must be a relief from all the pomp and ceremony to converse with your hostess in your native tongue.

The State Dinner that evening, planned entirely by the First Lady with the assistance of her small staff, was full of subtle references to the long-term friendship between the two countries, from her dress through the choices of wine.

Mrs. Trump chose a gown from the quintessentially French house of Chanel. A slender column of black Chantilly lace was hand-painted in silver with an embroidery of crystal and sequins. Christian Louboutin shoes in gunmetal complemented the gown. Madame Macron, again in Louis Vuitton, looked demure in a creamy white gown embellished with gold beading in a lattice work design that accented the bodice and shoulders, continuing down the wrist-length sleeves. The beading was repeated at the cinched waist. A simple chignon was a change from her usual bob.

The dinner was a series of impeccable choices. A hall filled with vases of cherry blossoms (1200 branches!) introduced guests to the dining room. In the smaller room, 13 tables for 10 were set, aiming for a more intimate gathering than the over-the-top extravaganzas of the past, held in tents on the lawn. The color scheme of white and gold was carried out in the White House china and flatware and echoed by centerpieces of sweet peas and white lilacs.

And a close-up of the menu:

The menu was planned, according to the White House, as a”showcase of America’s cuisines and traditions, with nuances of French influences.” Even the wines were chosen with attention to cooperation. The Domaine Serene Chardonnay is the fruit of vines from Dijon, grown in the volcanic Oregon soil and aged in French oak barrels. The Domaine Drouhin Pinot Noir “Laurène” comes with the motto, “French soul – Oregon soil” and also is aged in French oak barrels.

The evening was a triumph, at least in terms of aesthetics, and it would be safe to say that our present First Lady seems a perfect fit for the role.