A Vase of Flowers is More Than a Centerpiece

Things are often not what they seem, especially in the world of art. This is true not only in the market, but also in the paintings. Often, what we see before us  tells only a part of the story.

One such painting is Un Coin de Table (A Corner of the Table), painted in 1872 by Henri Fantin-Latour. 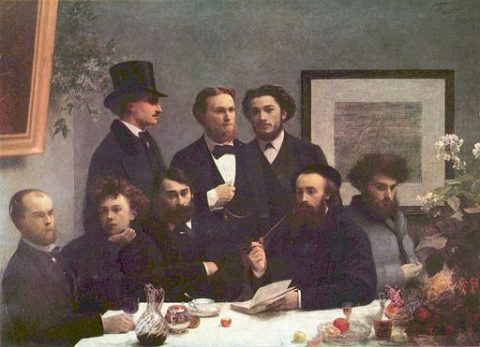 We see a gathering of men in sober 19th-century dress, seated around a table; their colleagues stand behind them. The linen-draped table bears the remains of a meal — a nearly empty wine decanter, a sugar bowl next to a coffee cup, and some partially eaten fruit. To the right, in the corner, a vase holds a sheaf of flowers. It could be the centerpiece, pushed aside for convenience, but these flowers served another purpose.

The painting is the third in a series of group portraits by Henri Fantin-Latour that celebrate the artistic giants of late 19th-century Paris. They provide a visual chronicle of the arts scene of the time.

The first in the series, Hommage à Delacroix (Homage to Delacroix) was painted in 1864. Baudelaire was a passionate admirer of the great romantic painter and was distraught at his death in 1863. Fantin-Latour was shocked by the meager number of mourners in the cortège, which he had followed along with Manet and Baudelaire. The following year, he painted the group of 10 luminaries, admirers all, who gathered before the portrait of Delacroix. It was meant to give the artist in death the honor he had not received in life.

The second, Un Atelier aux Batignolles (A Studio at Les Batignolles) was painted in 1870. Les Batignolles was the area of Paris where many of the Impressionists had their studios. Fantin-Latour painted this as a manifesto signaling that these were painters to be reckoned with. The sober dress indicates their seriousness, and the only two ornamental objects in the studio are symbolic. A statue of Minerva, goddess of Wisdom, says that these are artists not to be taken lightly, while a Japanese vase is a nod to the admiration the artists of the time felt for Far Eastern art. 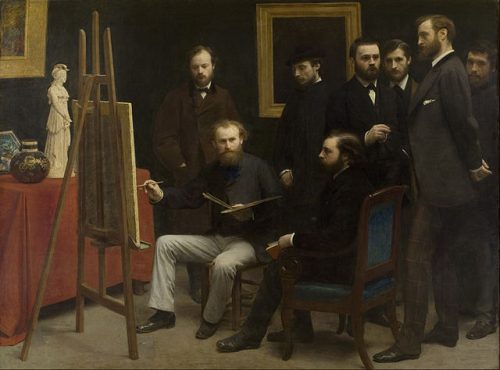 The fourth and final work of the series, Autour du Piano (Around the Piano), was painted in 1885 and dedicated to his friends and fellow artists. The painting makes reference to the popularity of Wagner in the years just after his death and the little concerts given by the group of friends. 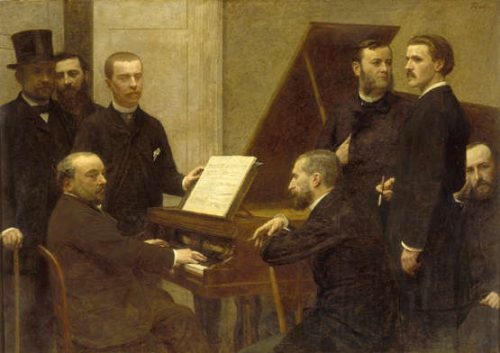 But now, let’s get back to our dinner

Arthur Rimbaud was a gifted prodigy with a well-deserved reputation for insufferable insolence — in effect, a talented brat. After the initial fascination with his talent and youth  wore thin, it is likely he was tolerated by many because of his close relationship with Paul Verlaine.

The kind and gentle poet Albert Mérat found him especially offensive. Mérat was to have figured among the guests at the table, but he decided not to sit for the painting, saying that he didn’t wish to go down in history in the company of  the young hooligan Rimbaud. And so, the would-be centerpiece was put to service in another capacity.

The next time you look at a work of art, remember that it sometimes pays to look beneath the surface.

Image credits: All by Henri Fantin-Latour,  Un Coin de Table (A Corner of a Table) (1872); Hommage à Delacroix (Homage to Delacroix) (1864); Un Atelier aux Batignolles (A Studio at Les Batignolles) (1870); Autour du Piano (Around the Piano) (1885). All paintings are conserved at the Musée d’Orsay.